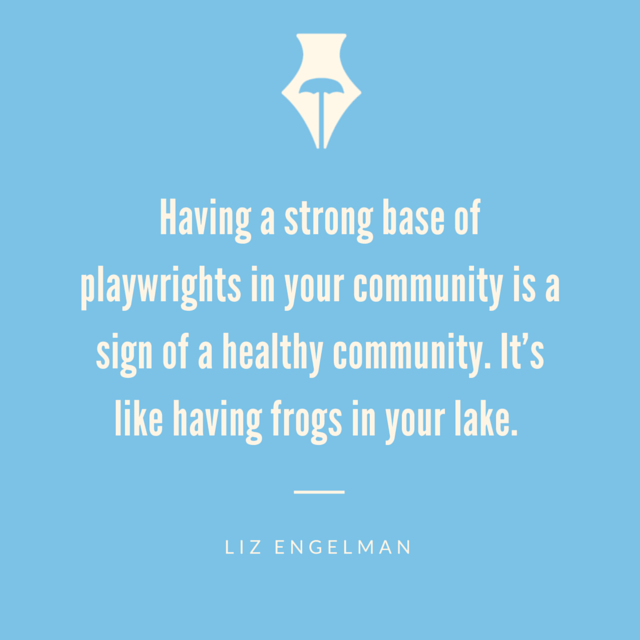 Liz Engelman is one of the most well-respected dramaturgs in the country. Currently a member of the faculty at UT Austin, she is also the founder and director of Tofte Lake Center at Norm’s Fish Camp, a creative retreat in the Boundary Waters of Minnesota. Engelman’s impressive employment history includes positions at Hedgebrook, Mixed Blood Theatre, the McCarter Theatre, ACT Theatre, Intiman Theatre, and Actors Theatre of Louisville. She has worked on the development of new plays as a dramaturg and director at respected institutions all over the country and has held multiple leadership positions with LMDA. In addition to accomplished career, Engelman is a generous contributor to the early career dramaturg community. She was one of the earliest supporters of Umbrella Project, and was kind enough to chat with our Executive Director about theatre-making ecosystems, what makes Seattle unique, and frogs.

NE: What is your personal definition of a dramaturg?

LE: For me, a dramaturg is a guide— a companion and reflector—along the way of discovering the story that wants to be told; in all the forms that this can take.

NE: Why do you think dramaturgically driven producing is a good combination of two traditionally separate roles?

LE: A dramaturg is a person who asks the right questions. So if you think dramaturgically, you’re asking the fundamental questions from the beginning. What do we want to say? Who do we want to say it to? Why is it worth saying? Why now? What do we want to communicate? Why do we want to communicate it? Why is this necessary? Why is it important? Why are we doing it here? A dramaturg asks this of a script, of a play, of the spark of an idea – and a producer is asking these same questions programmatically in the choice of a play in a certain place at a certain time. The former is focused on the play itself, and the latter is a producorial look at the impulse to produce it: they are the same questions.

NE: With that being said, what does mean for a dramaturg to be an advocate for a play or playwright?

LE: Telling one’s story is compelling. Through telling one’s story, other people learn about their own. All the ways that we can create avenues, outlets, paths and vehicles for stories to be told so they can be received by others and transformed and change lives—that’s what we’re doing here. On this planet.

There are many stories out there to be told and often the dominant culture dictates a certain kind of story, when there are many other ones out there. Helping to provide channels for those stories to be told so we can change and grow is essential. For the evolution of our culture. 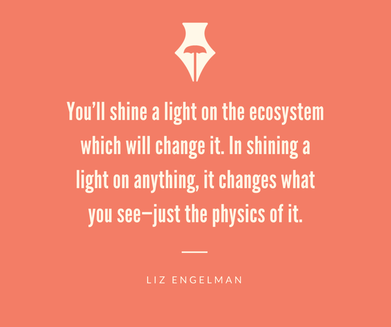 LE: Let me preface this again by saying that I think things have been changed since I left Seattle in 2001. New work development has been on the upswing. That said, to your questions: some of it is literally geographic. Just look at a map—Seattle is so far removed that I think people’s perception is that we aren’t nationally on the map—I don’t think it has historically been viewed as a playwright destination. At least previously in my time there. With Seattle Rep having their Writers Group and what Bryan Willis does [with Northwest Playwrights Alliance], and with Hedgebrook’s Women Playwrights Festival, I think there’s more now. But there hadn’t been the sense of a consolidated writing community, or there hadn’t been when I was there, at least. For me, too, as a dramaturg, what I yearned for was to hang out with writers developing their plays.

Because of the distance, I think it’s a wonderful challenge to make Seattle a destination for playwrights to spend more time, or even live. You can have your play done in Seattle, and then there is the day-to-day life of a community? Having a strong base of playwrights in your community is a sign of a healthy community. It’s like having frogs in your lake. What the Playwrights Center does in Minneapolis is feed their playwrights into their community, and I’d love to see Seattle have more frogs in their lake.

NE: What do you think it would take for us as a city and theatre community to get that healthy ecosystem in balance?

LE: You don’t want to plant an invasive species in your community—if frogs aren’t supposed to be there, don’t put frogs in your lake. What is the climate? If the culture is a writing culture, then how do we get more playwrights? But maybe it’s not so much about that plays are written—maybe they aren’t just written anymore, they’re devised or created—is it really about playwrights or is it about play-making? I think of Austin, and I think of everyone here as a something/something/something—they don’t necessarily self define as one thing. It’s about having people who are making theater in ways that are exciting to you. So: are we assuming we need more frogs? Or, is it that we actually do have frogs here, but no one here has been talking about it?

How does a successful play get out of Seattle? We want people to say, “I want my play done in Seattle because of the life that people could give it.” What’s the turn of that switch? Some of it is geography. But maybe that’s always been the mentality of Seattle: your play doesn’t need to get seen in other places because the people of Seattle love being in Seattle, maybe it doesn’t matter where it goes beyond that. Maybe they choose to make their work there because they love it and it’s not about where it goes next. That might be a strength and a weakness.

NE: I think that because Seattle is so geographically removed there’s an opportunity for Seattle to actually have an advantage—we don’t have to be in competition with New York or LA, we really get to start our own conversation. I think that conversation then feeds into the national conversation, but it gets to start out as it’s own thing.

LE: Because you’re where you are, you can create the conversation you want to have. Seattle has this rich opportunity to ask—what do we want to be? What do we want to say? And the fact that you’re asking these questions makes it the perfect time to create the identity you want to have for the community. I think the challenge is the west coast. People went to the west coast, they kept pushing west, and it was individual pursuit —and I think the trick in Seattle is that people want to make community, but they are also very individual in some ways. Where as I think in Austin or Minneapolis, the culture of the place is more communal. People gather in Austin, it’s warm out and they’re gathered on a back patio, having a beer at noon. In Minneapolis there’s a culture of giving back to the community with all their philanthropic funding. On the East Coast everyone is on top of each other. But I think on the west coast it can be harder. Making a community around people who are often very individual, but also looking at theater as a community—I think you have a west coast ethos that you live with. That’s part of the place. So how do use what that can give you? I think cities are ingrained with what they are—and I don’t mean there’s not a community there, it’s a fantastic,, exciting, and welcoming community! I spent so many happy years in Seattle, some of the best. At that time, I wished there were a little more of a tighter playwriting community because writers are my people. I work with story and for me it’s always “who are the story makers?”

NE: In your experience, what are the biggest roadblocks you see in the production of new plays?

LE: I think misplaced fear of risk, or the thought that producing a new play is risky. I hunger to see new plays so I don’t know where the risk is. I think it’s actually more risky to do plays that have already been seen so many times, to keep producing plays that have been done so often. I don’t know why people always say it’s more financially risky. I don’t need to go to see a star in a role; that doesn’t sell a new play for me. It’s the excitement of a new story, if that story is gripping, if it’s going to draw me in, that’s the excitement for me. I wish the American theatre was more nimble—I feel like a lot of the exciting work I see is happening outside of traditional regional theater spaces. There’s an excitement and an agility with smaller theatres and companies. It’s not that traditional regional theaters are inflexible, I just think they’re harder to move and bring new breath into. I don’t think creativity always needs the same four walls.

NE: There are a lot of organizations that are advocating for plays at the national level— NNPN, NPX, Playwrights’ Center, just to name a few, but what do you see Umbrella Project doing that is unique?

LE: I think your mission says it all: being able to advocate for playwrights and produce dramaturgically and develop new audiences authentically and passionately and to your best ability – this will make change. Just existing will make a change. I think what’s so special is that you exist. You’ll shine a light on the ecosystem which will change it. In shining a light on anything, it changes what you see—just the physics of it. I think what’s beautiful is that you’re raising awareness, and you’re raising consciousness. You’re doing it. You’re not just talking about it, you’re putting money where your mouth is. You’re seeing the big picture and making a place for yourself in it. To change the landscape. And I think that’s so special. And every city is going to do it differently and you’ve found out what Seattle needs and you’re doing it. And that’s fantastic.

NE: When I saw you in Austin you told me that you thought that every city should have something like Umbrella Project. Can you expand on what you mean by that?

LE: What you’re doing is you are dramaturging the community. You are seeing it as a whole, as a system, looking at all the interrelated parts and trying to figure out—how do we use what’s in this ecosystem to make it as healthy and vibrant as possible? And I think every city should/could have it look holistically at itself and then see how all of these parts make a beautiful whole. The fact that you are saying, “How do we advocate? How do we partner? How do we invest? How do we develop towards this greater goal of a long term life of a new play and playwrights?” – how expansive, cooperative, inclusive is that vision!?! Some cities are doing that, of course, with their own organizations, but when you were describing what you were doing in your own way I thought—oh my god! Yes, I want one, I want an Umbrella!

NE: I am so grateful you said yes to joining our advisory board. What made you want to help us develop Umbrella Project?

LE: Energy is contagious. The energy of your mission is contagious. Investing and advocating and developing—you’re using these great words and strengthening a community that I love so much and believe in and want everyone who lives there to be proud of—I want to be able to help in anyway that I can from afar. The essence. I’m in your corner.

Interested in investing in Umbrella Project?
Visit our Kickstarter page! Your gift of any size helps us further the lives of new plays.